Arduino robot controlled from an Android phone via Bluetooth 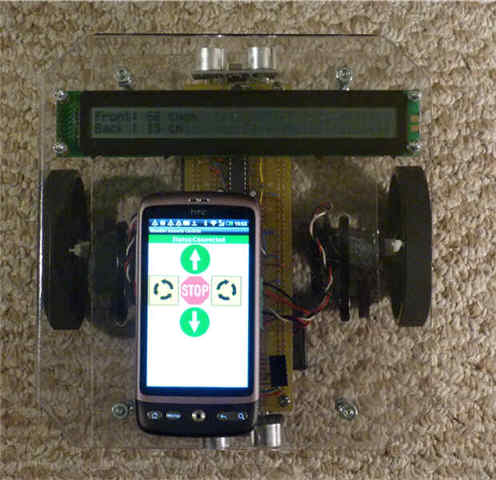 This is a differential steering robot that can be controlled from an Android phone via Bluetooth. The robot’s “brain” is Arduino Uno compatible board (an “Arduino on a breadboard”). The robot uses a JY-MCU Bluetooth module for communication with the Android phone. A custom Android app, created with the MIT App Inventor 2 essentially acts as a remote control, sending commands to the Arduino that tell the robot to move forward, reverse, stop or rotate.

The robot also has two ultrasonic sensors (one mounted on the front and one on the back) that are used for obstacle detection. If you try to drive the robot into a wall using your phone remote, the robot will overwrite that command and will stop when it detects an obstacle closer than 10 cm.

The communication between the phone and the Arduino board is very basic at the moment. When you press a button on the phone, it sends a byte over the Bluetooth connection (currently the numbers 0 to 5 are used). The Arduino sketch reads the data on the serial port and acts based on the command (0 is stop, 1 is move forward etc.). This can be easily extended and can go both ways. For example, we can easily display the data from the two ultrasonic distance sensor on the phone.

Note: You may see a character LCD screen on the robot that is controlled from my “Arduino” through a shift register. Currently the LCD just shows the readings from the two ultrasonic sensors and is not needed for this application. It is just a side project / experiment to get an LCD salvaged from a trashed phone working with Arduino and I just used the same robot platform for the test.

The Arduino sketch and the App Inventor 2 project file can be found on GitHub:

Disclaimer: This is a hobby for me and I am a noob. I am happy to share the code, as I learned from others who did the same, but you use it at your own risk.

The key components of the application have been already covered in earlier articles: