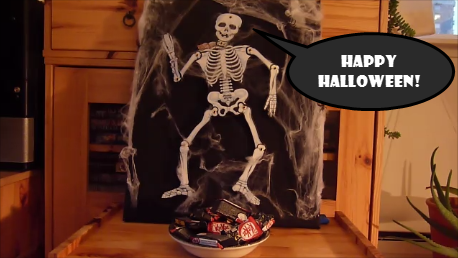 A simple Halloween themed project to add some animation and sounds to a cardboard skeleton cut-out. A PIR sensor at the top right corner (somewhat hidden under a clump of fake spider web) detects movement and triggers a hobby servo that rotates the torso of the skeleton. The eyes are a pair of red LEDs and the sound effects come from a WTV020SD-16P sound module. The “brain” of the operation is an Arduino Nano.